They were taken over by Barry Cinemas in 2012. The Acme Theatre opened in 1920, built for a prominent Riverton businesswoman, Belle Mote. . It was operated by Gabel Theaters, who also ran the Gem Theatre in Riverton and the Grand Theatre in Lander. . . . 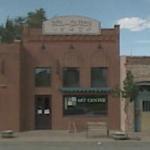